Customers often contact us asking for blocks of bone or antler for carving, similar to the blocks they use of stone, mineral or wood.

Unfortunately, these simply don’t exist. Bones and antlers come in their natural, organic shapes and textures. In our experience, customers who have expectations from "manufactured" items will not be happy with their purchases of bone or antler. Below are some more details: 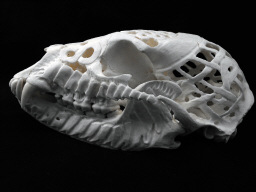 Bones come in the natural shapes you see in anatomy, not solid blocks. Larger bones, such as leg bones, are hollow in the centers and filled with soft marrow.

An artist can carve bones in ways that use the organic shape and structure of bones, put multiple pieces together or find other ways to express their creativity and skill, as in the example pictured here.

Historical large bone carvings people think of are either not made of “bone” proper, are made of many small pieces fitted together or are made from materials that are no longer available.

Similarly, antlers are not available in large solid blocks or cylinders. They come in the natural shapes of the antlers and are porous (not solid) in the center to varying degrees.

Moose antlers are the most dense (least porous) antlers due to their large size and weight. The large palm (main part) of a moose antler is a flattish surface that is curved. The moose stem, where the antler attaches to the head, is the most dense antler available, and is used in flint knapping (traditional chipping of rocks to make tools). These can be several inches in diameter and can also be used for carving and are fairly expensive. Click to view our inventory of Moose Stems

Good antler projects generally use the natural texture of the surface of antler rather than the center and will generally incorporate the natural shape of the antler, like chandeliers, drawer handles, etc.

Projects that involve carving away the outside to use the core, or that depend on very straight antlers, or drilling straight holes through the center of the antler to create a tube, will generally have limited success.

We’ve been told that at one time a type of stag antler with very straight, dense tines was imported from India, but these are no longer available. We have no other information on these.

Finding an antler to match the specific shape and measurements of a manufactured item such as a piece of furniture, tool, rifle, etc. is essentially impossible. We also are not able to produce rectangular "scales" or "blanks" for gun handles.

There are so many features to an antler: size, length, curves, angles and color that you could almost say each antler is unique like a snowflake. We feel for people who have a side and wish they had the pair, or who have a beautiful set with one broken tine. But we have found that it is basically impossible, or at least impractical, to find an antler to match another antler side, or to find a tine that will be a good match to an existing side.